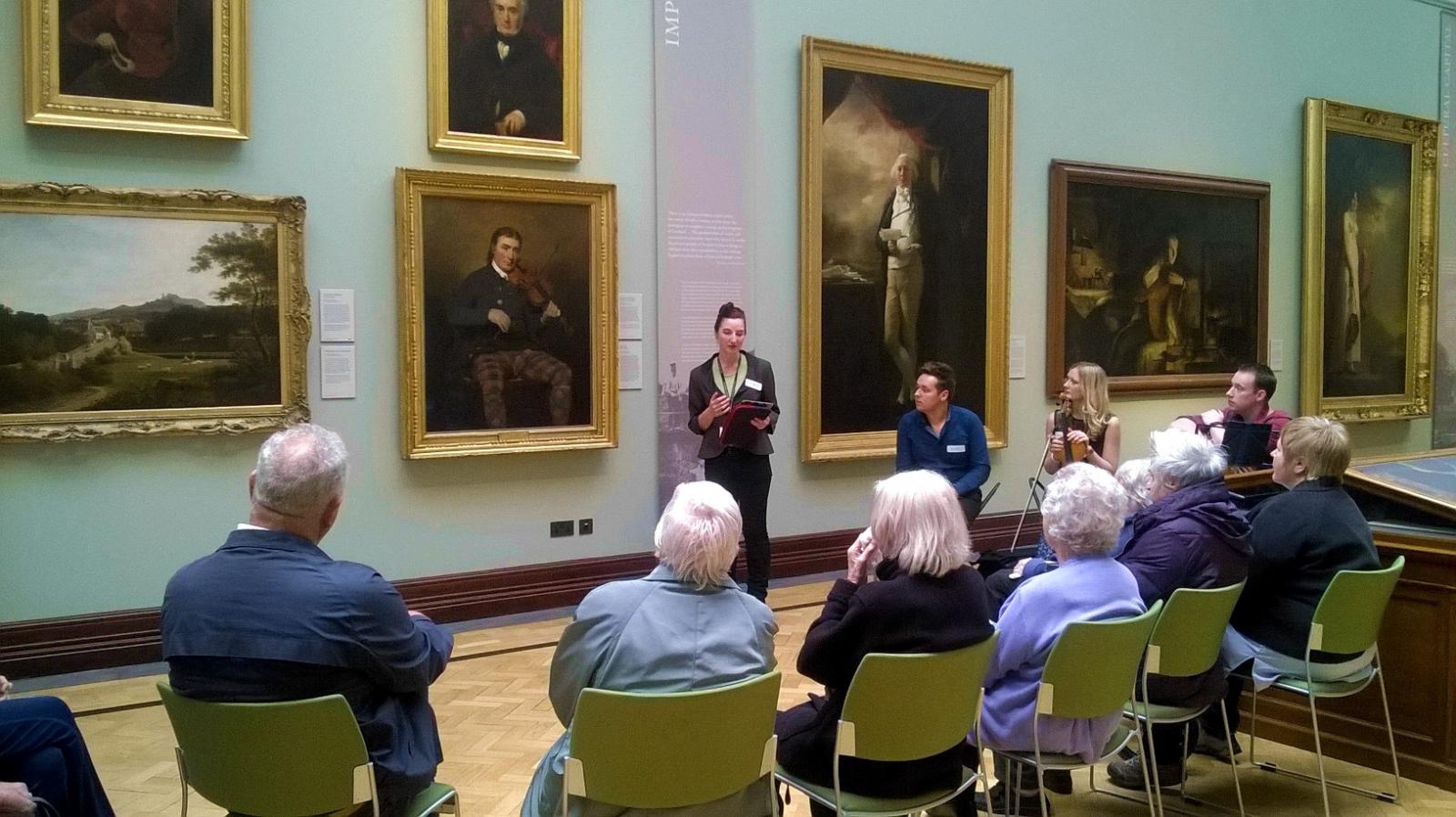 Live Music Now Scotland teamed up with the National Galleries of Scotland and the Festival and King’s Theatre Edinburgh to create a brand new type of dementia friendly music activity.

“All three organisations have been organising events for audiences living with dementia for some time now, but decided to join forces, and create something really special,” says Live Music Now Scotland project manager, Judith Walsh.

A series of ‘Reel Folk Sessions’ were piloted in June and July, thanks to funding from the Life Changes Trust, who are supporting the Forget Me Not project at the King’s and Festival theatres, and proved to be hugely popular with audiences. They were welcomed to the stunning surrounds of the Scottish National Portrait Gallery to the sounds of live music before being invited to enjoy tea and cakes. Tour guides from the Galleries then led the group around a series of paintings, giving some background on the artworks, before the musicians performed a piece of music to tie in with the art.

“The Festival and King’s Theatre Edinburgh has a rolling, year-round programme of dementia friendly events, performances, and lots of expertise in this field. The National Galleries have access to the absolutely beautiful surroundings of the Portrait Gallery, which makes for a fantastic venue. And we have some very high quality musicians, with experience of performing to audiences with dementia, and their carers. It made sense to link up and create something that many people could benefit from.”

After the success of the four initial pilot sessions with Scottish traditional musicians – fiddle, pipe and song trio Kilda in June, followed by vocal duo Robyn Stapleton and Clare Hastings in July – there are plans to roll out the project next year.

“We will run a nine-week course of concerts open to the public, from February onwards,” explains Judith. “We will be consulting with a dementia expert in September, and also running focus groups to get feedback and input from the audiences, to see what they enjoyed best. The idea is to make the Reel Folk Sessions even more participatory, and workshop-based. That might mean audiences learning to play ukulele, or writing their own songs – it depends what comes out of the focus groups really!”

The Reel Folk sessions will be free of charge, open to anyone, with no need to book in advance.

“Although we welcome people who live in care homes, or are already members of a dementia group, you don’t need to be – anyone with dementia can drop in with their carer. We aim to make the events as publicly accessible as possible.”

Composing with Care, Live Music Now’s flagship new music commissioning programme, will see Scottish composer Ailie Robertson writing a new work based on the responses of the Reel Folk participants. She will use as inspiration their thoughts and ideas of music and art, creating a new piece of music to be premiered publicly and in community settings across Scotland in 2017.

Kilda have been confirmed to perform in the 2017 series of Reel Folk Sessions, and more details will be announced as the project develops. Keep an eye on our Facebook page for details.

Forget me Not is a Life Changes Trust funded project to enable the King’s and Festival Theatres to become dementia friendly.