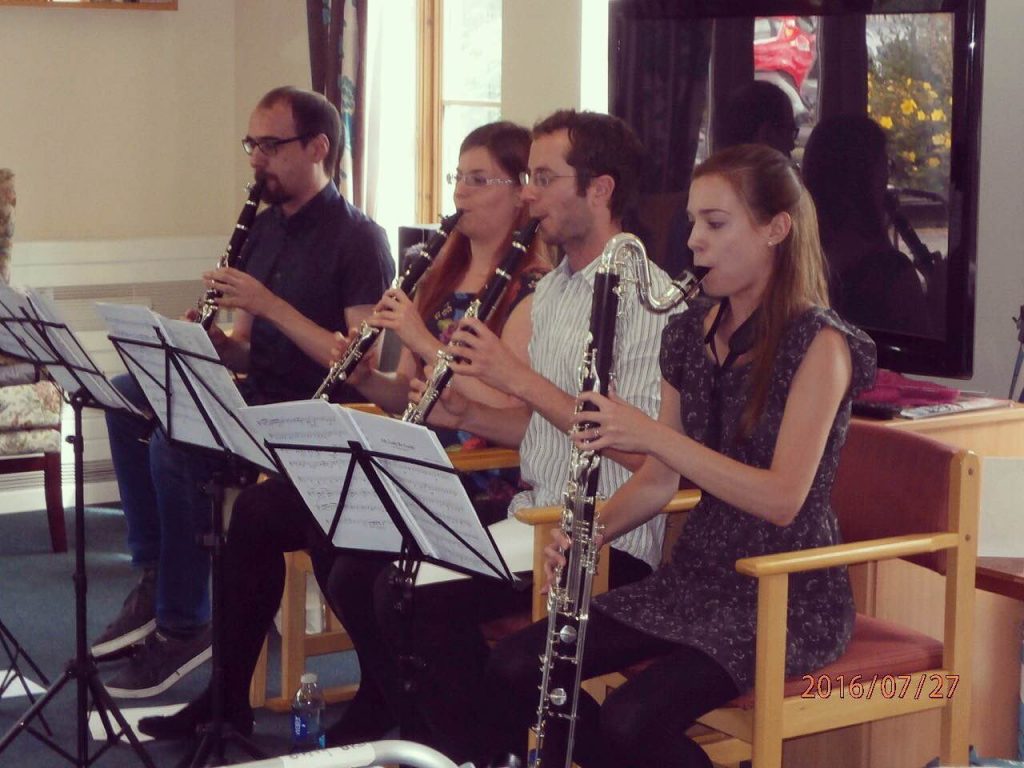 Bute Clarinet Quartet formed in 2013 with Daisy Evans, Tom Howells, Darius Gray (clarinets) and Katie Hole (bass clarinet).  Based in South Wales, the group hold a passion for music education and teach around the Cardiff area both as an ensemble and as individuals. The group has participated in various competitions, with notable achievements including winning first prize in the ensembles category at the National Eisteddfod (2014) and have developed their skills over the years by regularly performing outreach concerts for school groups in South Wales, ultimately leading to their first LMN tour.

Although this was Bute Clarinet Quartet’s first tour, the feedback received from the performances was incredibly encouraging and clarified the specific benefits achieved from each care home. From their preparation during training sessions and ability to adapt to different surroundings and needs, the musicians were able to engage almost all members of the audience in each of the six care homes, including those residents living with dementia.  They did this through assessing the size and acoustics of each room, judging whether a song might be too booming and adapting their performance to suit the requirements of each residency.  After contacting the venues, the quartet were advised by staff to play familiar songs in order to benefit those living with dementia. Added to the repertoire were both well-known songs and several alternative pieces including; Excerpts from Carmen – Bizet, Yesterday – The Beatles and an interactive version of It’s a Long Way to Tipperary, which involved Bute Clarinet to incorporate space, movement and singing into their performance while engaging the residents that are less mobile.

“Tom noticed during ‘It’s a long way to Tipperary’ that the daughter of one of the residents was quite upset. He spoke to the man and his daughter after the performance and the daughter told Tom her father wanted to sing to him. After Tom sat and listened to him sing, the daughter explained that her father barely speaks, let alone sings, so this was an extraordinary response.” Katie Hole, Bute Clarinet Quartet

The group found that a strong recurring piece of their performance was handing out a baton to an audience member and allowing them to conduct the group, showcasing a wide variety of clarinet quartet repertoire and making music more accessible to all, through to form of audience participation.

“We encouraged movement to the music, used percussion instruments, introduced the clarinet family and presented people with the opportunity to conduct. At all of the venues, we included the staff in the activities and at Anwen Care Home, Porthcawl, many friends and family attended. It was really wonderful to see how people became more open and willing to participate throughout the concerts.” Daisy Evans, Bute Clarinet Quartet

The quartet found that as an ensemble, their communication skills developed, particularly the flexibility in their approach to the different venues. After each concert, the group discussed ways in which they could improve their programme by altering certain pieces and improving the interactive elements. The quartet found that the tour was a fantastic introduction to working with Live Music Now and are very much look forward to developing their skills in future engagements.