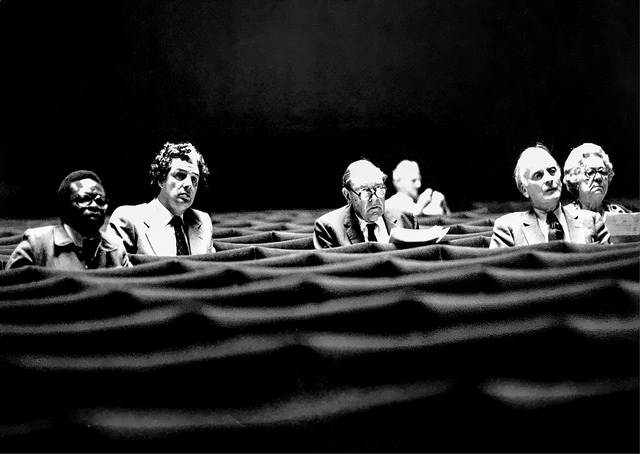 Here’s a photo of LMN’s very first audition panel at Wigmore Hall in 1977.

(Many thanks to LMN Wales committee member Chris Ball for the original clipping.)

Mr Felix Cobbson
Ghanaian-born Felix Cobbson was a storyteller, musician and schoolteacher. He regularly represented African Culture at prestigious events and held many sessions in his African village as well as for the BBC, Arts Council and various other organisations.

John Stanton Shirley-Quirk CBE (28 August 1931 – 7 April 2014) was an English bass-baritone. A member of the English Opera Group during 1964–76, he gave premiere performances of several operatic and vocal works by Benjamin Britten, recording these and other works under the composer’s direction. He also sang and recorded a wide range of works by other composers, ranging from Handel through Tchaikovsky to Henze.

Gerald Moore CBE (30 July 1899 – 13 March 1987) was an English classical pianist best known for his career as an accompanist for many famous musicians. Among those with whom he was closely associated were Dietrich Fischer-Dieskau, Elisabeth Schumann, Hans Hotter, Elisabeth Schwarzkopf, Victoria de los Ángeles and Pablo Casals. Moore gave lectures on stage, radio and television about musical topics. He also wrote about music, publishing volumes of memoirs and practical guides to interpretation of lieder.

Yehudi Menuhin, Baron Menuhin, OM KBE (22 April 1916 – 12 March 1999) was an American-born violinist and conductor who spent most of his performing career in Britain. He is widely considered one of the greatest violinists of the 20th century. Menuhin founded Live Music Now in 1977.

Dame Eva Turner DBE (10 March 1892 – 16 June 1990) was an English dramatic soprano with an international reputation. Her strong, steady and well-trained voice was renowned for its clarion power in Italian and German operatic roles.