Intergenerational concerts prove to be a big success 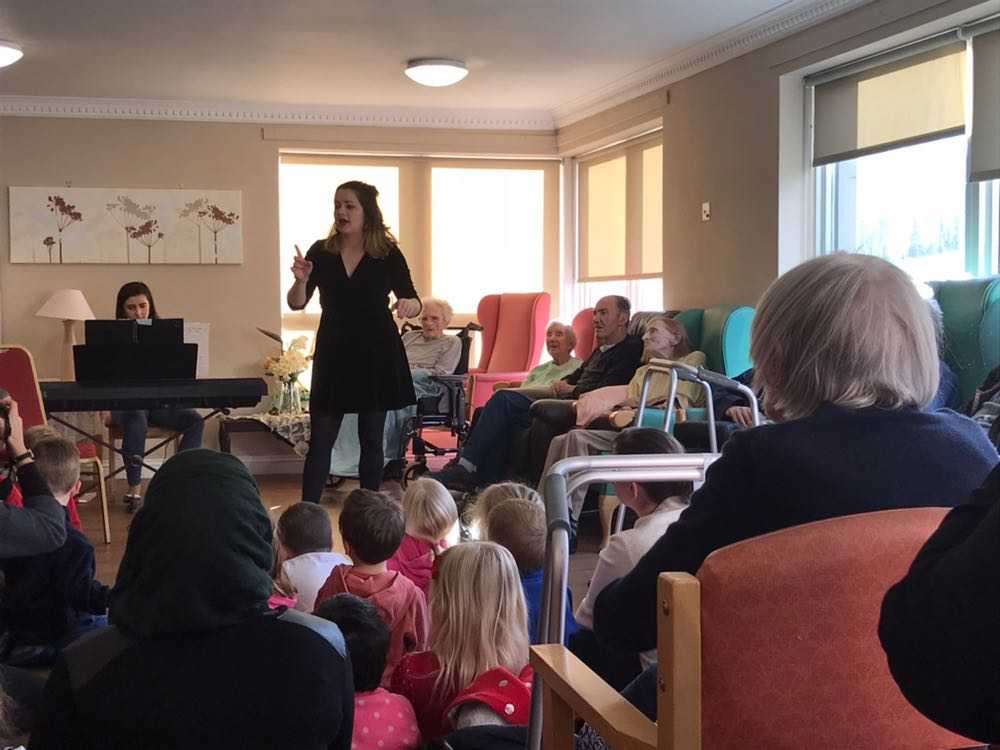 As a music outreach organisation, Live Music Now strives to reach a wide range of audiences. With that in mind, a new initiative from Live Music Now Scotland recently brought together two very different audiences to enjoy music at the same time – young children in nursery schools and older people in care homes.

As always, the performing musicians tailored the music to suit the occasion, and the resulting interactive performances proved to be a big success. The first of these intergenerational concerts took place in Canniesburn Care Home, in the Bearsden area of Glasgow in early December. The classical act, Voice and Verse — a duo made up of mezzo soprano Laura McFall and pianist Kristine Donnan — entertained the crowd of care home residents and visitors from the nearby Canniesburn nursery.

Singer Laura McFall told us more about the performance:

What music did you perform on the day?

“We performed a mix of classical songs, nursery rhymes, folk songs and musical theatre classics. We decided that it would be a good idea to link ‘Deh Vieni’ by Mozart to a well-known nursery rhyme, ‘Twinkle Twinkle’, also by Mozart). We asked the children to lie on the floor while myself and the staff members blew bubbles over the children and adults. We’ve realised that going from the known (‘Twinkle Twinkle’) to the unknown (‘Deh Vieni’) is a great way to introduce classical music and composers to both children and older people.

“We also coupled ‘You Are My Sunshine’ (which is well-known and is always very popular everywhere we go) with the famous nursery rhyme ‘Rain rain go away’. Both songs work very well as a quodlibet (more than one song together) and we incorporated actions. Both the children and older people joined in with the singing and actions, and some of the older people were helping to teach the children the words. We also performed a song called ‘Rainbow Boat’ and used a sheet of Lycra to put over the top of everyone and swayed from side to side. This was really beautiful as we could see that both the children and elderly people enjoyed this activity equally. We also gave the bubbles to the audience so they could all have a go together.”

Which bits did the audience seem to like best?

“One little boy from the nursery closed his eyes and rocked back and forward the whole way through one of our classical songs called ‘The Ships of Arcady’ by Michael Head. At the very end he opened his eyes and clapped, with such excitement! That was really nice. Everyone loved the bubbles and the upbeat songs, such as ‘That’s Amore’ that they could all dance along too.”

Have Voice & Verse ever played to an audience like that before?

“We have never performed to an intergenerational audience before, but have always wanted to. We absolutely loved every minute, and this performance has proven the importance of having intergenerational concerts on a regular basis. Children and older people have so much in common, yet can learn so much from each other, especially when it comes to music. There was such an excitement from both the older people and the children when they walked into the room, and even in this short space of time, there was such a beautiful connection between both groups.”

More intergenerational concerts are planned, this time with the traditional Scottish musicians Ron Jappy and Grant McFarlane visiting Canniesburn Care Home and it’s hoped that many more will be possible in the not too distant future.

LMN duo Voice and Verse perform classical music and nursery rhymes as part of a recent intergenerational concert in Scotland.