Musicians from Live Music Now have been visiting the Royal United Hospitals Bath for one-off performances and workshops for several years, as part of the Hospital’s ‘Soundbite’ series. The programme has had a positive impact on both patients and visitors to the hospital, proving uplifting for patients and improving the overall atmosphere on wards. Thanks to new funding from the Astor Foundation, we have been able to extend this regular programme over the past year and add to it with two short residencies. We aimed to increase the number of people who can benefit from the project, build deeper relationships between patients and musicians, and further develop musicians’ understanding of working in a hospital context.

During the year April 2016-March 2017, there were 36 sessions split across 12 visits. Each visit included a performance in the public space in the hospital, and workshops in two wards for older people. This is a doubling of LMN activity in the hospital compared with the year before. Musicians were predominantly classical players – harp, flute, guitar and violin – plus a jazz singer/guitarist who visited twice. Two of the LMN ensembles completed a short residency – a sequence of three visits to the hospital. The public performances provided a welcoming atmosphere in the public ‘atrium’ space in the hospital. The sessions on wards included short sessions in each of the bays: musicians played a range of pieces and found ways to engage with patients at their bedside through conversation, singing together or taking requests, as well as connecting through their playing.

The music proved uplifting for patients, connecting with them regardless of language and bringing them something positive to engage with.

“One lady seemed very down when we arrived, but as Llewelyn was playing she was saying positive words in her own language (Russian?) and shouting out bravo! … Another lady was out of the ward when Llewelyn arrived. She appeared with Physios as he was playing a classical piece, and she sang along. At the end said it reminded her of Austria, she had a conversation with Llewelyn in German! She asked for his photo and autograph which he supplied at the end of the day!” (resident musician)

Staff also commented on the positive impact it had on the atmosphere in the wards: “That was lovely”, “brightened the place up”, “shame you can’t stay longer.”

Sessions were often relaxing for both patients and staff – valuable in what can be a hectic, stressful environment:

“One lady commented that the music had made her day and had made her much happier than she had been. Generally people seem more relaxed after the performance, either closing their eyes or just having a contented appearance. He often played classical, soothing pieces and this induced a more relaxed atmosphere.” (resident musician)

“There was one lady in the first bay who seemed quite unwell and had visitors, however, she seemed so engaged with the performance that for my performance of Autumn, I moved the harp closer to her and played directly to her so that she feels more of the vibrations of the sound. She eventually fell asleep and look[ed] entirely at peace.” (LMN musician)

“There was a Greek lady sitting next to me and she had [been] friendly but somewhat restless up until I started to perform Caro Mio Ben. It was at this moment that she moved from a horizontal position to sit up on the side of the bed. The entire room went silent and we all felt a moment. The Greek lady said that she had found peace during the song.” (LMN musician)

This impact also extended to medical staff, who commented on the benefit of the music for themselves:

“One member of staff said it was really beneficial for them not just patients, as it was relaxing. Staff would often stop and stand in the entrance of a bay watching the musician.” (resident musician)

The visits from the musicians have a social dimension, providing a focus for conversation between patients, staff and visitors. LMN musicians often talk about their musical background and experiences and this in turn encourages patients to share their own experiences.

“Patients and visitors wanted to speak with the musicians and engage with them after the music. During the music patients would often catch the eye of the musicians, and would talk to one another and the staff about the music.” (resident musician)

The musicians were able to connect with patients living with dementia. The short case study that follows was written by the resident musician at the hospital, who was supporting two LMN musicians on the ACE OPU (Assessment & Comprehensive Evaluation Older Persons’ Unit) ward. She describes a transformation in one patient from withdrawn to fully engaged:

“I took them first to ACE ward which is a difficult ward to perform on due to the layout and lack of room but they were very flexible and accommodating. In the gentlemen’s bay there was one patient in particular with dementia who I tried to chat to but he wasn’t communicative, just looked at me blankly. However when the music started, he began transforming! His eyes opened wider and he looked around and he began swaying to the music and slowly as the music went on became more and more animated! He kept looking at me and so I was moving to the music as well in similar ways to him and smiling at him and he made eye contact and almost understood our mutual appreciation of the music. By the last song that was played one of the HCA’s had him up dancing in the middle of the ward and all the staff were crowding around watching. It was truly magical. The contrast between the withdrawn gentleman not choosing to make eye contact to the showman dancing around the ward had everyone grinning from ear to ear!”

The next short description is from LMN musician Llewelyn Jones. Here he has chosen to play a piece of music that he knows will be familiar to the patient. He describes how they are able to make a connection for the duration of the performance:

“The Welsh lady from the previous week was still a patient. She seemed to have deteriorated since. I decided to open this performance with a Welsh hymn that she would definitely recognise, Calon La^n. Rosie [resident musician] sat beside her for this performance and she noticed that she had sung it word for word and I could also hear this from my position. She was very disorientated, however, hearing the hymn had really stablised her train of thought for those minutes.” 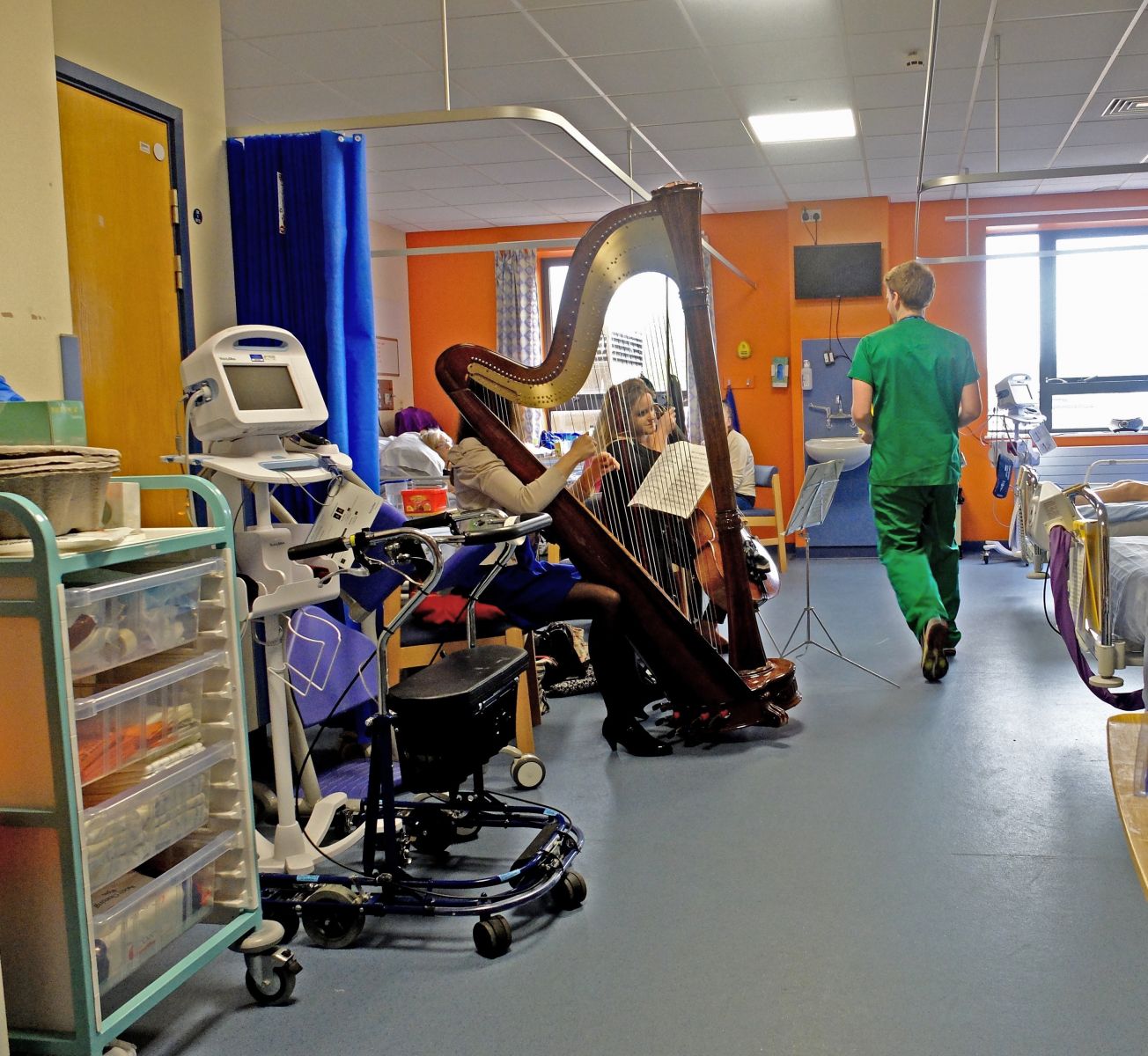 Through the two short residencies, the musicians had the opportunity to visit the hospital on three consecutive occasions. They had support from a mentor who helped them plan the sessions, observed them in action and supported their reflective debrief. This had an impact on their own learning from the project.

Some of the key points that players reflected on were:

• Value of getting to know individual patients and their backgrounds / interests
• Building their repertoire of more familiar songs, and in some cases noting specific requests and learning these for the subsequent week
• Playing more by memory
• Balance of conversation/spoken introductions and music
• Movement around the wards – learning to accommodate the medical needs of the ward environment and also working closely but still sensitively with patients, finding the balance between reaching out but not invading personal space.
• Developing confidence to engage with patients, including those who were at first less engaged.

• Deciding on a balance of familiar and less familiar repertoire.

The project has had some positive outcomes, proving uplifting and also calming for both patients and staff, contributing to a positive atmosphere in the wards, providing a focus for social interactions, and making positive connections with people living with dementia.

Extending the one-off visits to a residency model had a greater impact on musicians in terms of their practice development. They were able to reflect on their experiences, try different things and develop their repertoire: there was also more pressure on the players to extend their repertoire to avoid repetition. Where the same patients were on the ward in successive sessions, the musicians could build a good rapport with them.

The partnership with ‘Art at the Heart’ and support from the resident musician was essential for LMN players to work successfully within the hospital environment, in particular in establishing a rapport and good relationship with staff and patients.

Building on this, we plan to extend the residency model further in the coming year, as well as continuing to explore the potential for research that will look in more detail at the impact of the work. 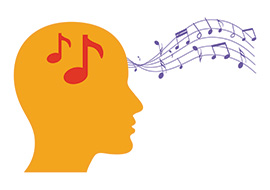