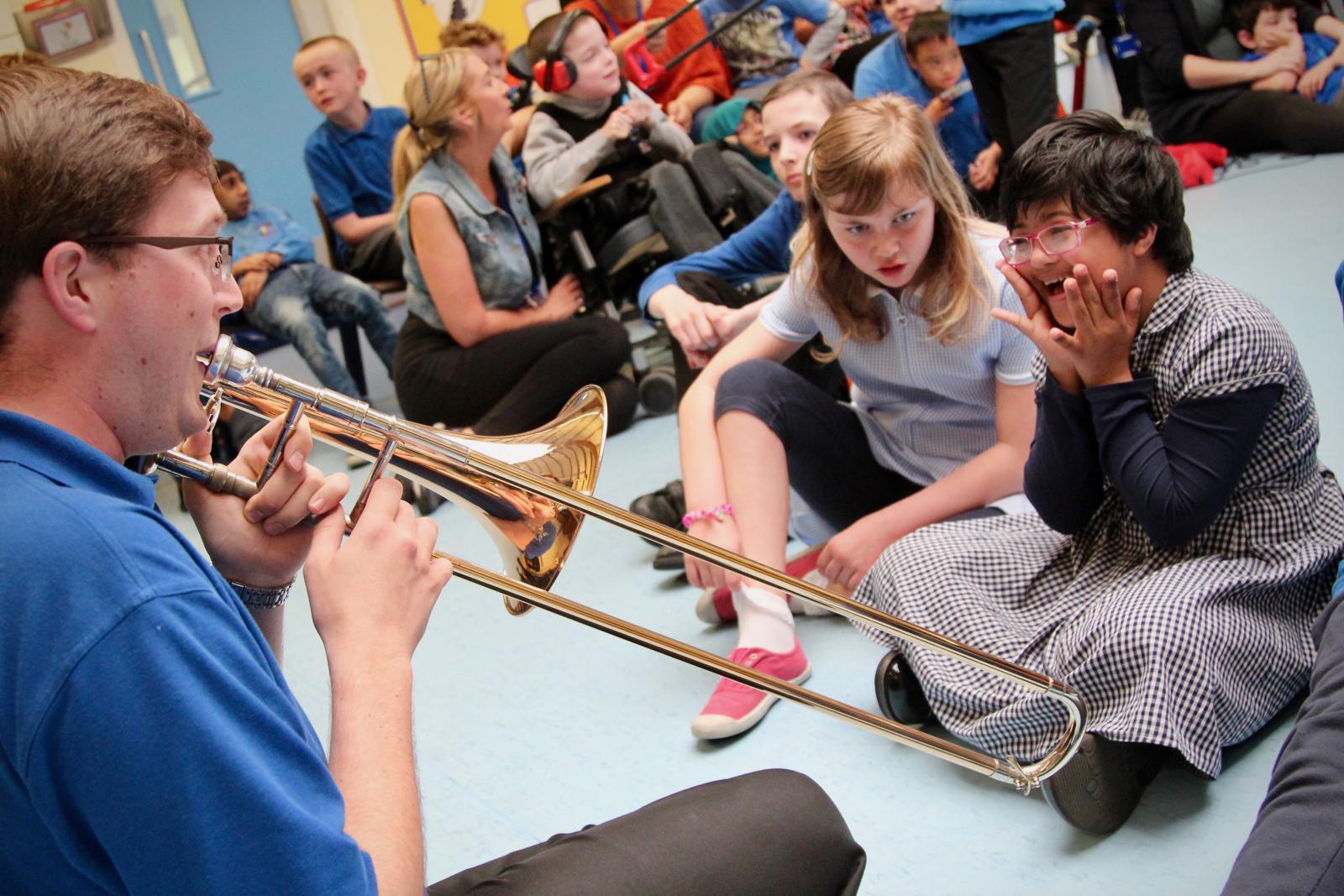 With so much going on, we decided to share our top five favourite projects of the year. Take a look back at some of the amazing work our musicians have been doing across the UK. We couldn’t have done it without your support.

1. The Sky Begins to Change

The Sky Begins To Change is a brand new 20-minute piece composed by LMN alumna Kerry Andrew on the theme of “how we talk”. The Arts Council England-funded commission drew on material gathered during musical outreach sessions led by Live Music Now musicians with hundreds of older people in care homes in Gloucestershire, Lincolnshire and Shropshire over the past year, in partnership with The Orders of St John Care Trust and Creative Inspiration Shropshire. The piece premiered this past summer at Barton Arts Festival, Cheltenham Music Festival and Shrewsbury Folk Festival.

We launched our 2-year Musician in Residence programme at Kingfisher Community Special School in last year. In 2016-2017, LMN musician Caroline Waddington (clarinet) provided regular music sessions throughout the year for small groups of children and helped the school develop their new music curriculum. The school has been delighted with the impact of the music sessions, promoting children’s communication, engagement and sensory experiences.

“Some of our ASD children have be able to access some 1-1 sessions. Due to Caroline’s musical knowledge she has been able to use colour and pattern to teach one child some piano – this is amazing!” – Kingfisher School

“Caroline’s lessons are beautiful and the use of the clarinet provoked responses from the children that l am unable to gain in the classroom. The pace of the lessons was great and the time given to each child was equally suitable. She created a calm atmosphere allowing the children to feel comfortable and relaxed.” – Class Teacher, Kingfisher School

In addition to the residency we also provided concerts for the whole school – Borealis Saxophone Quartet, 12th January 2017 and Slidin’ About Trombone Quartet, 16th June 2017. LMN violinist Jess Hall will continue this work next year and will also work with the school to provide two embedded training projects for other musicians

The LMN Music Residency Programme (Fellowship) is funded by the Paul Hamlyn Foundation (Arts in Education Programme) and the Stoller Charitable Trust.

LMN musicians have been working with Alan and his neighbours in a North London care home on a choir and singing project. Singing in the care home choir gives Alan a chance to fully participate in a group activity.

Alan moved to Nightingale a year and a half ago following a large bleed to his brain. He was left with aphasia, which affects his speech and he has difficulties with communication. Alan has always loved music, particularly Jazz artists such as Ella Fitzgerald, so he is familiar with scatting.

Alan’s daughter wrote:
”It is wonderful to see how participatory music activities like this illustrate the different ways language can be used and how someone who sometimes struggles to be fully understood can be truly celebrated in this special moment.”

Live Music Now held the first ever Musicians’ Practice Forum for LMN musicians across the UK on 30 January 2017, supported by Help Musicians UK and the Mayfield Valley Arts Trust.

Over sixty LMN musicians travelled to Cecil Sharp House in London to take part in a day of discussion, training refreshers, networking and performances and a keynote from Youth Music CEO, and LMN alumnus, Matt Griffiths. Read more here.

Imagine yourself inside Yehudi Menuhin’s violin as it resonates with memories of the music it has played, the places it has travelled, and the people who continue to be affected by its owner’s legacy.

This was the starting point for a unique collaboration between Live Music Now, artist Heidi Hinder, composer Richard Barnard and children in primary and special schools from across Devon. The resulting musical-sculptural installation, which was displayed at The Mix Devon schools festival and at Dartington Hall, allowed audiences a glimpse inside “Menuhin’s Violin” as they listened to a soundscape of music and words evoking the memories of the world-renowned violinist.

This Heritage Lottery funded project celebrates the 100th anniversary of Menuhin’s birth, and his legacy in Live Music Now, the organisation he helped establish 40 years ago.