Pupils in special schools across Northern Ireland are having ‘out of this world’ musical experiences with Live Music Now musicians as part of ‘Our Place in Space’, one of ten Unboxed projects across the UK.

Centred around an epic scale model of the solar system designed by the artist Oliver Jeffers, and led by Nerve Centre, Our Place in Space incorporates an exciting learning and events programme. Live Music Now has been commissioned to deliver a special schools strand, bringing stellar performances to over 3000 pupils in 19 schools between April and October 2022.

Since the launch of Our Place in Space in April, eleven Live Music Now musicians have taken part in schools projects ranging from three days to eight weeks, as well as one off concerts, all taking musical inspiration from themes of space, perspective and inclusion. Schools in Belfast, Coleraine, Hillsborough, Limavady and Strabane have all taken part, engaging over 600 pupils to date.

…It gives our musicians the freedom and flexibility to try out new ideas, while working within our Inspire training framework. So far we’ve had various iterations of Twinkle Twinkle Little Star – variously played by a brass trio, jazz duo, blues singer, flamenco guitarist and trad groups – as well as plenty of space themed songs, from ‘Fly me to the moon’ to David Bowie.”

Pupils from St Gerard’s, Belfast have been working with Live Music Now musicians Hannah Murray and Will Brown since early April. They’ve really run with the theme using Sam Ryder’s Spaceman, singing and performing in sign language, Makaton, as well as a range of instruments. The video below shows the exuberant result:

‘The kids absolutely loved it, I think because of the way Hannah and Will approached it – it was so free – everyone’s involved, nobody’s excluded, if a child wants to dance or suddenly explode into freeform improvisation, they’re allowed to do that, and it really gave them that scope to be creative.’

The sculpture trail of the solar system is currently on Divis Mountain Belfast until 10 July. In August it will touch base in Cambridge, before returning to Northern Ireland in the Autumn. Live Music Now’s programme will continue with more concerts and projects in special schools across Northern Ireland. 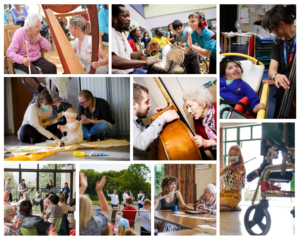 There is no excerpt because this is a protected post.

Audiences in Medway were delighted by the quality of performers at IntraFest 2022, taking place between 15-17 July in Medway. Musicians, singers, poets, dancers, artists 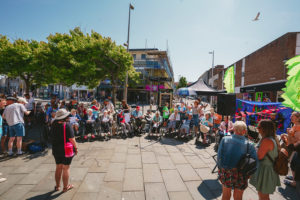 Festivities in Weston-super-Mare to launch “Dancing Above The Sea” Six brand-new compositions were showcased in July across six locations around England, as ‘Round Here (a 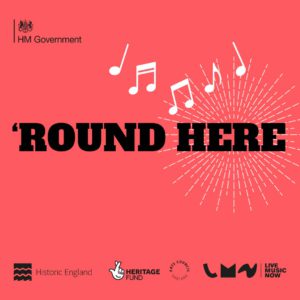 Professional musicians will be working with local community groups in locations across England to create musical compositions inspired by the high street, thanks to a