For people living with dementia, and their carers, the past two years have been particularly difficult. Isolation from family and friends, the absence of usual routines, and the health implications of Covid-19 have often led to heightened anxiety and confusion.

Live Music Now’s regular work with memory cafes* across Devon was paused in March 2020, and subsequently moved online. In the past six months, it has been wonderful to gradually return to in-person performances at these venues, to reconnect with some familiar faces and to bring live music to some new groups.

Between 1-3 March, folk duo Bowreed performed six participatory concerts at six memory cafés* across Devon, bringing live music and joy to some of those who have been disproportionately affected by the pandemic.

The tour saw Bowreed visit Dartmouth, Crediton, Chudleigh, Bovey Tracey, Teignmouth and Totnes for uplifting hour-long musical performances. During this time, the duo of Fred Holden (fiddle) and Ben Trott (guitar & accordion) played a series of songs from their repertoire of Irish and Scottish traditional music, interspersed with waltzes and polkas, discussing the rhythms and melodies with the audience as they went along. There was ample opportunity for participation too, and audiences were keen to get involved through toe-tapping, clapping and foot-stamping. The pair ended their performance with a set of tunes by the piper Gordon Duncan, which, as Fred says: “never fails to raise the roof!”

Connie Sharp, Group Coordinator for the Alzheimer’s Society, said of one concert: “Bowreed went down a storm yesterday! They were great and interacted really well with the audience. Such talented musicians too. Some said it was the best concert they’d attended.”

Brian, of Age Concern Crediton said: “The performers had a good manner with the audience, answering questions and discussing the music. Altogether, a great success.”

Fred Holden (Bowreed) said of the performances: “The energy in the room was immediately positive, and everybody was keen to join in from the start. The conversations we had and stories we shared reminded us both how crucial a role live performance plays in our careers.”

Live Music Now is grateful to Devon County Council’s Reconnect, Rebuild, Recover Fund, who funded the project to bring live music to people with dementia. Other musicians involved include Louis Bingham, who can be seen leading the audience in a group dance video above.

*Memory cafés are safe spaces where those living with dementia can discuss their situation with an experienced professional (or others in their situation) and receive guidance and advice over a cup of tea. 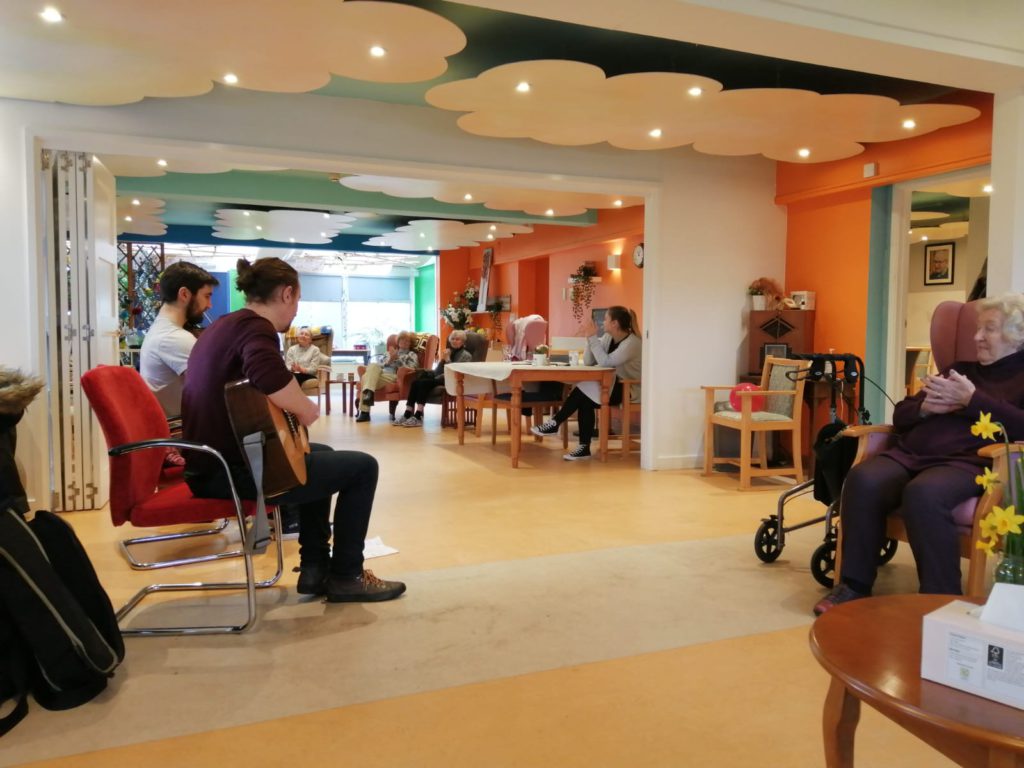 Bowreed perform at The Ness Hub at Teignmouth