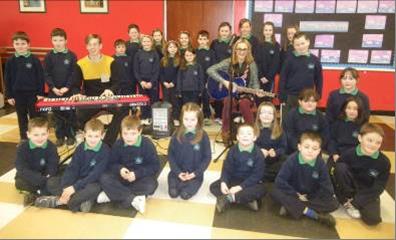 In early 2013 Live Music Now NI delivered a 20-week Musical Connections program to six North Antrim primary schools in rural settings. The Program ran from January to June and was funded by Ulster Garden Villages and The Anti Sectarian Fund. The aim of the project was to build cross community links between the schools and encourage learning about various musical styles and traditions, broadening the cultural horizon of all involved.

Music can play a vital role in fostering cross-community interaction, but opportunities are being lost in small schools in single-identity communities where populations are too low to qualify for many music based engagement programs. To address this need, LMN jazz musician John Leighton delivered an action packed program that involved learning about some of the core elements of music-making, experiencing live performances, taking part in a composition project, making a live recording and performing in front of an audience.

The program was performance based and most of the sessions involved a presentation about the featured style/culture followed by a performance of the music. Following this, an interactive performance/game involving the children and finishing with a summary involving a question and answer session. Styles covered include Pop music, African drumming circles, Irish traditional, Hip-hop, Jazz, Blues, Balkan, Klezmer and Ulster Scots.

In the final phase of the program all 18 classes composed an original piece of music under John’s guidance and made live recordings of their work. All the pieces were recorded live in the classroom and were compiled to form a CD called “From Carnalbanagh to Carey”.

All participating schools came together for a celebratory performance at The Braid Arts Centre on the 19th of June 2013.

During the two-hour programme, over 250 children performed their original work to an ecstatic audience comprising around 400 members of the public, family and friends. The cds were sold at the concert, generating income that went back to the schools to fund more musical activity. In addition, 4 students from each school were selected to form a choir that rehearsed and performed an original composition by John at the event.

During the performance the children remained backstage and were given access to an onsite museum space where they could mingle and meet new friends from different communities.

‘The children benefited immensely from the project. They were able to experience a wide range of musical genres from first hand experience and enjoy hearing music performed by musicians who really knew what they were doing! The varied programme allowed children the opportunity to discuss, compose and take part in music at it’s most creative and enjoyable level’ School Principal