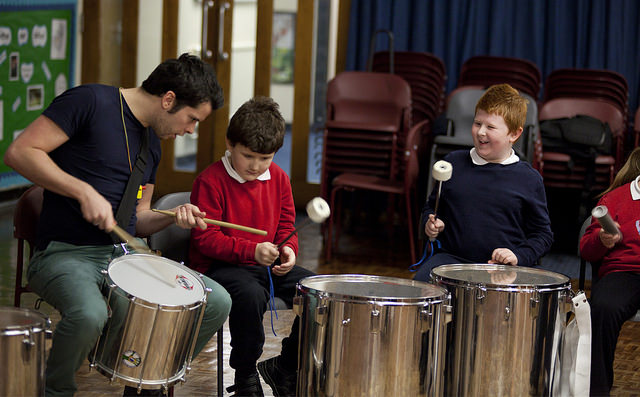 During September to December 2014, St Christopher’s School, Wrexham, Wales hosted an LMN “Musicians in Residence” programme, supported by Classic FM. St Christopher’s is a large special school in North Wales with 285 pupils aged 6 to 19 years. Pupils have a range of special educational needs. Most pupils have additional learning needs which include physical, sensory and medical needs as well as speech, language and communication difficulties. Seven per cent of the pupils have ‘looked-after child’ status and approximately 49% of pupils are entitled to free school meals. The school rarely has the opportunity to work with professional musicians and was delighted to be part of the Musicians in Residence project.

As part of the project, the school hosted LMN performances by The Absentees (folk duo) and Project Jam Sandwich (world music trio), enabling pupils to enjoy the experience of live music, many for the first time. In addition, around 70 pupils took part in a series of small group workshops with LMN percussionist Rhys Matthews. Here, Rhys describes the project and how one pupil in particular was drawn into the sound world of percussion.

“Ben, a pupil with visual impairment, was part of my Thursday morning group and instantly stood out from the crowd. A teacher had mentioned to me that he responds to music more than any other subject or activity in school. In my performance for the whole school, it was clear that not only was he was fascinated by the music I played, but also had a strong physical reaction to it. My challenge would be to ensure that the workshop sessions were as interactive and stimulating as possible to sustain his interest and build on his responsiveness to music.”

I brought a range of percussion instruments into school to use in the workshops. During the initial sessions, we explored the instruments through musical games. This was ideal for Ben as he used his heightened senses of sound and touch to participate fully in the group. In the Body Percussion games he accurately copied the sounds being created; in Call and Response games he demonstrated a strong sense of rhythm; and he enjoyed experimenting with the physical nature of the instruments, responding to the vibrations from the xylophone and drums to help him get the best sound from the instruments. Over the course of the sessions we explored different styles of music, including Samba, African Drumming, and Rock and Pop drumming.

Having successfully taken part in the initial group activities, Ben was filled with confidence and it was wonderful to see him become more skillful and verbal as the sessions progressed. He began to experiment with the instruments to express his ideas during composition activities: in one session staff were particularly struck when he played a percussion instrument whilst singing – something that they hadn’t seen him do before. He got a warm round of applause from staff and pupils afterwards.

In the final sessions he began to ask if he could perform alongside me. I asked if he would like to lead the Samba activity. He had listened intently to what I had been practicing with the group in previous sessions and led the Samba with confidence and skill. His progress over the sessions was impressive and a delight to see.

Overall the project has been a roaring success. Every child involved in the sessions has had some form of response to the music, and school staff were amazed at reactions of some pupils who are often unresponsive. Projects like this change lives. I was delighted to be part of it and it has been wonderful to get to know all at St Christopher’s School.”

“Rhys has been excellent and the live performances have gone brilliantly too. It’s all made a great contribution to the music curriculum and to life in school generally. I hope we can continue to have live performances in the future.” Paul Fisher, Music Co-ordinator, St Christopher’s School 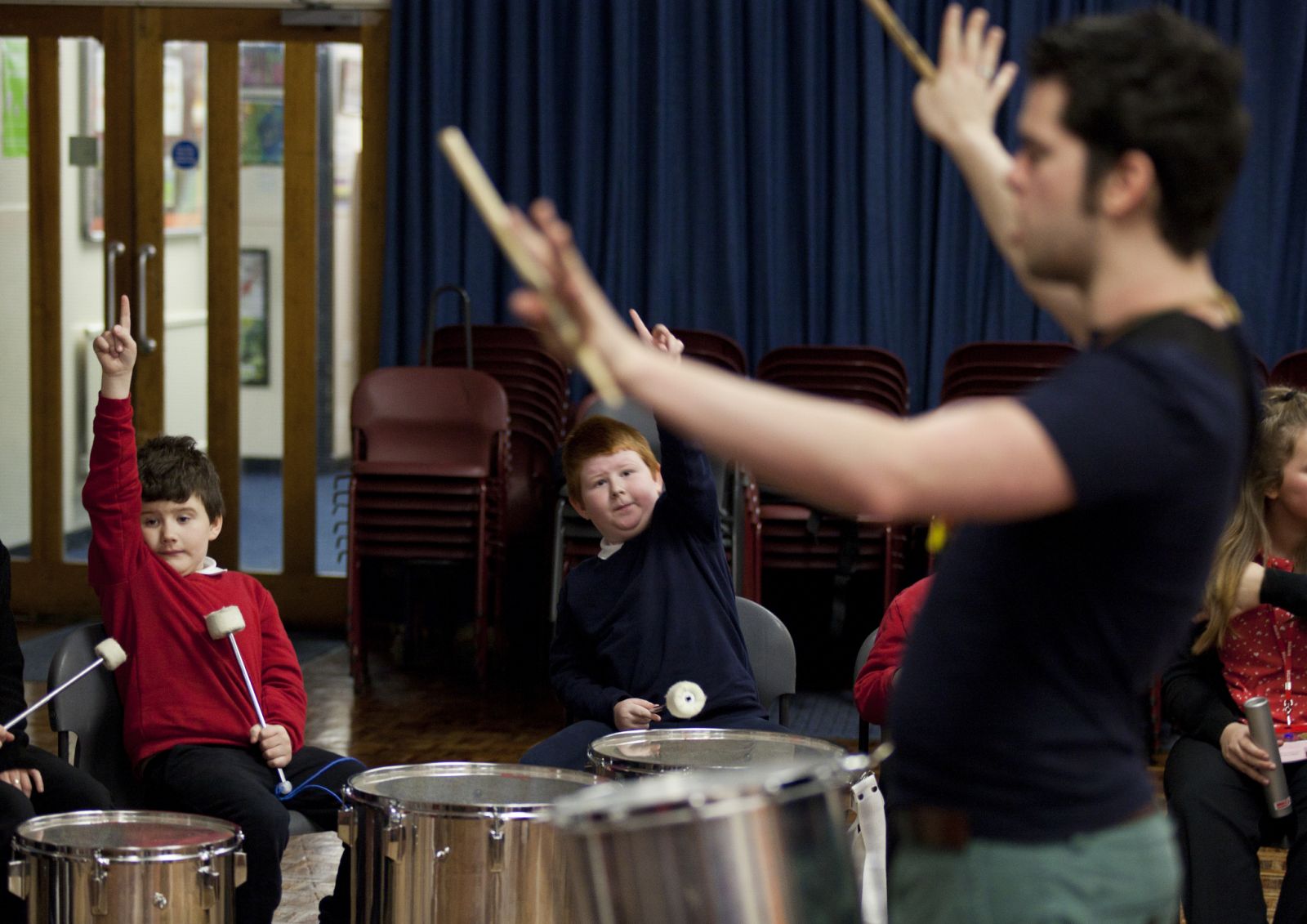