“Music making has the potential to aid relaxation, relieve boredom, distract from pain and ease anxiety in children and young people who can become isolated due to illness and hospitalisation”. Ros Hawley, Musical Mentoring Programme Evaluator

Music Mentoring (March 2015 – March 2016) was a ground breaking project for Alder Hey Children’s Hospital and Live Music Now, delivering music within the hospital on an unprecedented scale and opening up the possibilities of providing music as a core provision for patients.  During the year, 97 ward based sessions were delivered by four musicians from Live Music Now North West – Jess Hall (violin), Bea Hubble (oboe), Delia Stevens (percussion) and Kathryn Williams (flute).    The project culminated in a celebration event in the new hospital foyer, attended by over seventy people.

Alder Hey is one of the largest children’s hospitals in Europe, treating over 270,000 patients each year.  In October 2015, the hospital moved into Alder Hey in the Park, a brand new purpose built hospital inspired by children and young people.  Alder Hey’s Arts for Health programme has been established for over a decade and offers patients and their families a varied programme which pioneers innovative approaches to using the arts in paediatric healthcare.   This includes a highly successful Musician in Residence Programme delivered by LMN alumna, Georgina Aasgaard, who guided and mentored the LMN musicians during the year. The Arts for Health team identified a need for additional music within the hospital to support longer term patients during their stay, and secured funding from the National Foundation for Youth Music to launch Musical Mentoring in partnership with Live Music Now.

The project enabled Live Music Now to deliver its first major residency in a paediatric healthcare setting and embedded a bespoke training programme for the musicians.  The music sessions took place in four areas of the hospital where there are a high concentration of long term patients:  Oncology Unit (patients receiving treatment for cancer), Neuromedical (patients with acquired brain injury), Dewi Jones Unit (patients with mental health conditions) and a general medical ward for patients with a variety of conditions.

Following initial training for the musicians, the project included a crucial 8 week skills-sharing phase between the musicians and the lead healthcare professionals from each ward, enabling the two professions to come together and share skills, expertise and experiences.  The musicians then each delivered a series of 16 sessions on their host ward, incorporating a mixture of informal performances for patients and their families, and opportunities for patients to develop their musical skills and create their own music.  27 “Mini” performances took place on wards where children and young people performed to family and staff with their musician, and a much larger celebration event at the end of the project in March 2016, in the main atrium, was attended by around 70 people.

Ros Hawley – LMN Alumna and specialist in the use of live music for children, young people and adults whose lives are affected by complex healthcare needs and disabilities – conducted an evaluation of the programme, interviewing patients, families, staff and musicians as part of the process.  Feedback about the project was extremely positive. 76% of patient questionnaires said that the music sessions improved their hospital stay giving a score of 4 or 5, with 5 being the greatest improvement to hospital stay.

When asked why music is important in a hospital, patients talked about it being a distraction from hospital life:

“It breaks up the day”. Until mum and dad get here I’m just waiting… even though I’ve got arts and crafts to do, it’s not the same as having someone do something with me… and you can’t really bring your own instrument into hospital.”

“I love the flute. When she [LMN musician] plays it, it’s amazing – [it’s] fun to mess about with it and to experiment.” 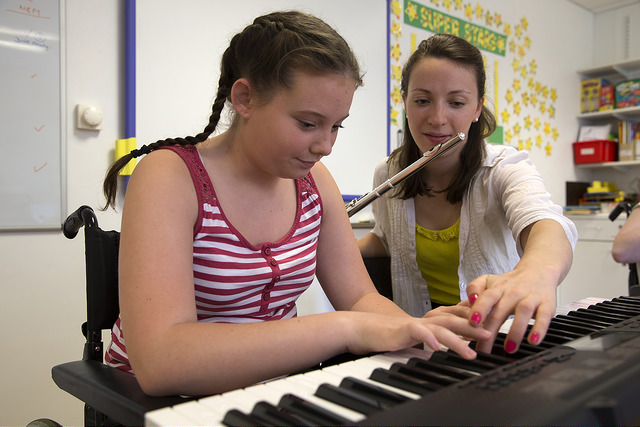 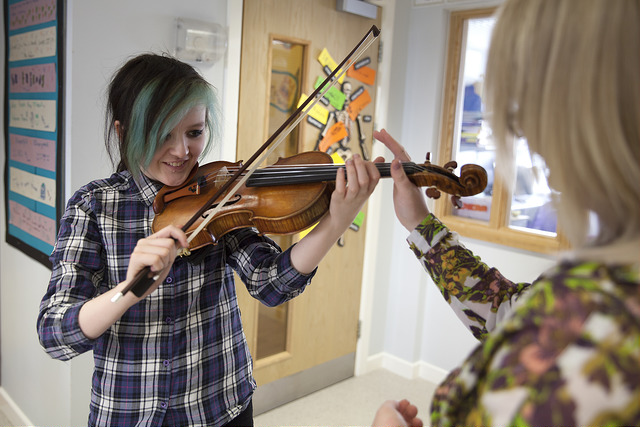 Whilst other patients said that it provided an outlet for emotions:

“If they’re sad or worried it [music] can help them, and they can make any tune they want… they can get their emotions out – more jolly tunes will cheer them up.”

“It lifted my mood all week.”

Musicians encouraged patients’ families to join in the sessions, providing an enjoyable and positive activity for families to do together.  When asked about what she liked about the sessions, one mum said “loads of smiles” and “I wish they’d come more often” and another adult said “It relaxes the children’ and “I like seeing D smiling, that cheers me up”. 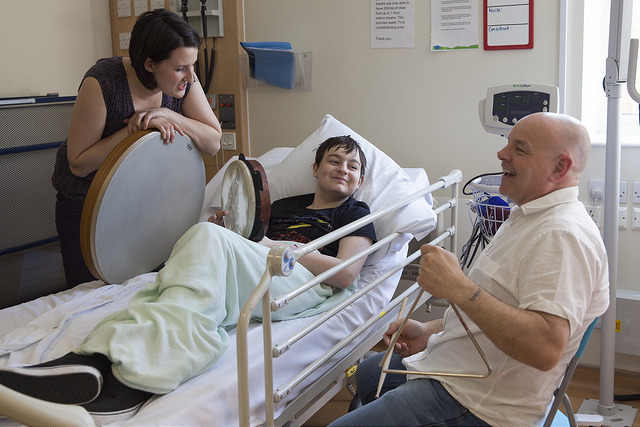 It was crucial for the musicians to liaise closely with hospital staff.  Despite the busy environment, staff were extremely positive about having music on the wards.

“I have seen how it changes an atmosphere and how it can tap into people’s feelings and emotions.”  Hospital healthcare practitioner

“ …good for group dynamics; the patients are often learning individually – it’s hard to teach as a class due to the age range whereas the music can bring them together”  Hospital School Teacher

“Music seems to transcend everything. If they are really ill it can divert them from their pain and illness. They could have the chime bars on their bed, even if they are poorly… because the musicians know what they are doing, they can make it into something … beautiful melodies.” Teacher, Alder Hey Children’s Hospital

And for the LMN musicians, new to the hospital environment and working as part of a wider artistic team, the project helped developed confidence in their practical abilities and increased their skill level in delivering music making with patients and families in hospital.   The evaluation report noted that “the musicians gained significant knowledge and understanding of the paediatric hospital environment, and the potential for music making to aid relaxation, relieve boredom, distract from pain and ease anxiety in children and young people who can become isolated due to illness and hospitalisation”.

“To be allowed into the room of someone who is having treatment or recovering from treatment and given the opportunity to make music with them is a real privilege”.  Kathryn Williams, LMN Project Musician

The hospital has raised funding to continue the LMN music sessions until December 2016, after which we hope to secure new funds to bring four new LMN musicians on board to work alongside the current four project musicians.

To read an individual patient case study from this project, please click here.