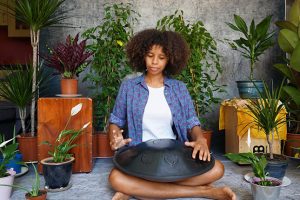 My duo Boubakiki was on a Live Music Now tour of Torbay when the news of Corona grew more serious. Joe, the saxophonist, and I grew increasingly anxious through the week as our concerts were cancelled. At that time it was impossible to know the scale of the impact, though there were rumours and rumbles of where it was progressing.

The first weeks were a blur of emails of cancelled projects. Every day the calendar felt like it was teasing me with where I should have been. I was supposed to be in theatres, solo shows, tours, workshops and festivals but each day I was waking up in my bed staring at another day stuck at home.

“It felt so difficult to be motivated to work during those first scary weeks… I couldn’t see the purpose of practising without performance.”

I felt so sad. I hadn’t realised how I took the vibrancy of my life for granted. Most weeks I would be interacting with thousands of people, whether passing through schools, travelling or performing, but now my world was reduced to my living room and my housemate.

It felt so difficult to be motivated to work during those first scary weeks. The weight of worry sat heavily wondering about family, friends and the future of our industry. I couldn’t see the purpose of practising without performance; I didn’t know how to create new work; and I wasn’t sure how to reach people who needed it.

“Slowly I began to enjoy the time I’d always wanted while rushing between gigs.”

Slowly I began to enjoy the time I’d always wanted while rushing between gigs. I’ve always loved playing the handpan and suddenly I had space to explore this instrument. I wanted to teach and raise awareness of this instrument which so many hadn’t heard of before. So I created simple friendly YouTube videos.

This was a huge learning curve, suddenly being a sound engineer, lighting designer and editor. I think it made me better at speaking, there’s more impulse to be concise when you know you’re the one that’s going to edit it! I learned (because I’ve now cut this out hundreds of times) that my favourite word is ‘SO’.

I committed to creating a new tutorial every week, branching away from handpan and into rhythm and music making for all.  I was so lucky with my training, but I know that’s not everyone’s reality. I want everyone to have access to music and the power it holds, so my series covers a new topic each week for every ability.

I wasn’t prepared for the reaction, positive and negative. I grew my YouTube channel, gaining subscribers and slowly getting closer to the threshold needed to earn money from adverts (not that I’m there yet, but I’m trying!) I set up a patreon , a way people can donate if they’re enjoying my content.

As soon as you speak into camera on the internet some people feel they have licence to tell you what they think. Most people said encouraging things, or felt they’d benefited but those who disagreed or didn’t like the content, (of a free tutorial!), were quick to tell me. At first this hurt me, but I’m so glad I had that experience of breathing and moving through rude comments for what was about to come.

“In the aftermath of George Floyd’s death, there was a reaction to the Black Lives Matter movement I’d never seen in my white friends.”

In the aftermath of George Floyd’s death there was a reaction to the Black Lives Matter movement I’d never seen in my white friends. Suddenly my timelines were flooded with images of death, shattering statistics and general outcry. It felt like people acted like they had just discovered racism, and wanted to tell me, a Black woman, how bad they’ve realised prejudice is. It felt mostly well intentioned, but not enough.

I wanted it to be the catalyst for change, but I wasn’t sure it would be. My fire to create was reignited, and I wrote I’m Not A Hashtag (below) in a night. It was a stand alone poem, my feeling set down in words, but when I shared it with a friend, who was also up at 3am, she suggested it could be a rap, something musical. And so the next day my housemate woke up to me announcing I’d written a song, and asking if she’d help me film it. It felt like the work I’d done learning to video edit and the confidence I’d gained in speaking out had just been preparation for this. In our back garden we shot on a phone for an afternoon and I released the video the next day, too quickly for me to get scared.

The post blew up, I’ve never had anything close to virality, but suddenly my views were in the thousands not the hundreds. I love percussion and the power of wordless music, but I discovered an intimacy in text and I enjoyed using that medium. The comments flooding in were mostly positive, and powerful, but there was negativity and anger which prompted me to write my second song the next week . This one was playful, poking fun at the response ‘Why do you hate white people, why don’t you say all lives matter?’  I played around with rapping faster, delivering in a different style (and it featured a real samba whistle)

I now have four songs out, and the tone has shifted throughout. The first 3 are angry, trying to change people’s actions or views to create a more liberal inclusive world. But I’m most proud of my final song ‘My Hair is My Power. It’s a documentation of my journey to loving myself as a mixed-race person. I was so scared about releasing it to the world I pulled the plug three times during its creation.

Being a front woman and saying my own words to the world is so scary. But so liberating. I had to use the same workshopping skills I’d honed encouraging melodies from shy Year 4s on myself. Reassuring myself my words are valid and deserve to be shared. It’s such a different, terrifying, experience to put your name beside words and stand by them. Once they’re written you can’t control how they are perceived, it’s out of your hands. But music has the power to reach people. I’ve been overwhelmed by strangers and unexpected friends complimenting me, saying my pieces resonate with them. All I want to do is make people stop and think, and on that level I’m immensely thankful for the lockdown. It has given me a platform to share, and the confidence to use it.